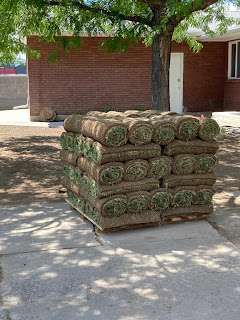 Posted by balloongal at 8:34 PM No comments: 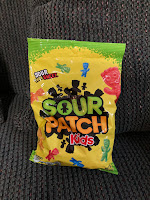 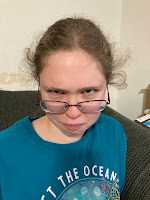 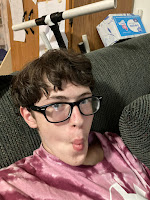 Ha Ha Ha Ha. I love my kids. My son is so quick with his humor.
By the way, we all had some sour candy.

It was also Ice Cream Day. We had a big chocolate roll in the freezer that had cream in the middle. We got it out and had "iced" cream. 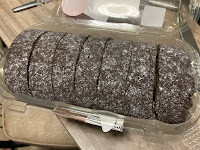 Posted by balloongal at 1:07 PM No comments:

July 16 was Ginger Rogers' Birthday. We didn't watch a Ginger Rogers movie that day but the kids were so funny and put on a quick puppet show based on the song, "Let's Call the Whole Thing Off" from the Fred Astaire/Ginger Rogers movie, Shall We Dance? I put the video of them doing it on YouTube.

July 16 was also Personal Chef's Day so we had personal pizzas on tortillas just like last year.

Both Jr. Jr. and Lucky got bonding time with parents that night. Jr. Jr. and Jeremy went owling and ate "chuckles." They didn't see any owls but Jr. Jr. told me when they got home about seeing mice and deer and I could tell he had a great time. 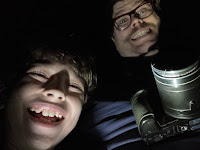 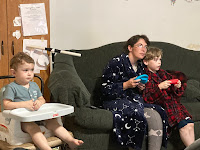 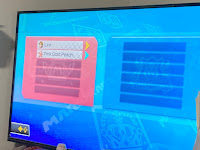 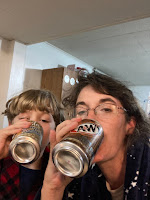 Lucky and I played video games while wearing our bathrobes and Jet looked on. Lucky's choice. By the end I had to take my bathrobe off, though, because it's Summertime and soooo hot. Also by the end, Lucky decided that even though we were on the same team playing Mario Kart, he would try to defeat me. Bwah ha ha ha. Jr. made us all some popcorn to snack on as well. During a pause in the game, Lucky brought out a surprise. He got us each a can of pop (himself and me, not Jet). So cute. Jr. had ginger ale because of Ginger Rogers' birthday. Because Jr. was so helpful, he and Nichole got to watch a show in another room while Lucky and I had our bonding time.

Posted by balloongal at 1:04 PM No comments: 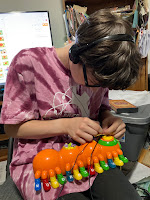 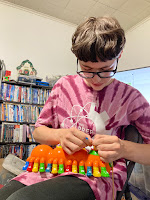 Jr.: Alphabet Cow lives!
Mom: This is why Jr.'s doing UVU Prep.
Nichole: So he can bring decapitated children's toys to life.
We've had this toy since Nichole was a toddler. It's been stepped on, dropped, thrown, had heavy objects put on it, you know how it is with some children's toys. It's supposed to be "Alphabet Pal" but it sounds like "Alphabet Cow" so that's what we've been calling it for years.
Well, such is life, Alphabet Cow finally bit the dust. The head cracked and came off completely. Jr. decided to use his skills and tools he had and "bring it back to life." He managed to get it to play music through his headphones since originally the speaker was in the head and he managed to get the lights working. That's my STEM boy.
Jeremy and I were able to go to Jr.'s closing celebration for UVU Prep. We all went as a family the first year and last year they just had a drive-thru to pick up shirts since it was all online. 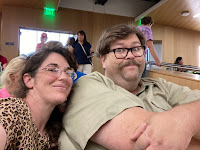 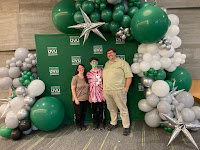 Jr. had a good experience with this program for three years both in person and online. He was happy to be back in person this year. Can't you tell by his smile how happy he was? 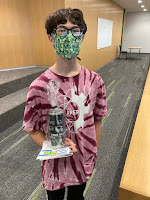 Like the first year the closing celebration was crowded but Jr. was able to show us some of the projects he worked on. He also got a UVU water bottle which he's been waiting three summers for. It's interesting the things he gets excited for. We all have things like that, though. 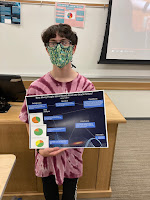 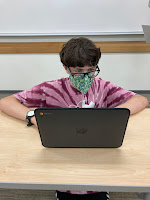 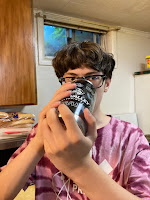 I'm so glad he enjoyed his time at UVU Prep and I'm looking forward to seeing what kinds of things come from what he's learned in the future. Bringing more decapitated children's toys to life? We'll see.
When we got home that night, I quickly let everyone have a gummi worm since it was National Gummi Worm Day on July 15. 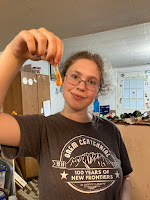 It was also World Youth Skills Day and I already commented on Jr.'s STEM skills.
Posted by balloongal at 1:01 PM No comments:

For Bastille Day on July 14, we watched a Sandra Boynton video of a cat singing a song in French about hoping you don't understand French and saying some silly things in that language. So funny.
Yo Yo Ma played cello for it. Michael Ford (who has collaborated with Sandra Boynton quite a bit with her music) played piano. A little bit of accordion was also thrown in by Weird Al Yankovic. Love it.
July 14 is also Mac & Cheese Day. I made some.
It is also Shark Awareness Day so of course I had to dress Jet in some shark clothes. What a cutie. It's that Sharks and Jets thing again. 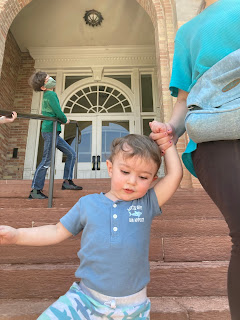 Posted by balloongal at 1:34 PM No comments: 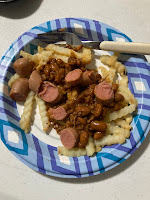 It was also Embrace Your Geekness Day (I always thought it was Geekiness, turns out I was wrong). So I hugged my geek of a husband but didn't get a picture. Actually, we did do some geek stuff. We recently started watching The Mysterious Benedict Society TV series. We like the books written by Trenton Lee Stewart so it's been fun to see them keep the feel of the books in the TV series. We watched an episode on Embrace Your Geekness Day. I would consider that fitting in with geekness because a couple years ago for Halloween, Nichole and Jr. both dressed up as characters from the books.

Posted by balloongal at 1:56 PM No comments:

"Lookin at a Thing in a Bag"

How many of you are familiar with Homestar Runner? It was thing when I was in college (and beyond). A website for our generation, referencing things from the '80s (and the 30's?- not my generation- and the future?), but done nowadays (can 20 years ago count as nowadays?). Ever heard of Strongbad, Trogdor, Teen Girl Squad? All from homestarrunner.com You can find videos on YouTube of some of the cartoons and Strongbad emails.
We introduced our children to it a few years ago and every once in a while random quotes will pop out of my mouth (or Jeremy's) and our children sometimes know what we're talking about. They do know the Trogdor song by heart. And if we say, "Throw the baby in the lake," they don't worry.
Anyway, for Family Home Evening activity on Paper Bag Day, July 12, Jeremy came up with a few activities and we wrote them on slips of paper and put them in paper lunch sacks. We rolled a dice then whatever number that was we looked in the bag and did that activity. We only got through a couple activities but we had fun.
We showed the kids the "Lookin at a Thing in a Bag" cartoon from Homestar Runner. I made Kool-aid and got a picture of a cool guy looking at a thing in a bag with a drink. 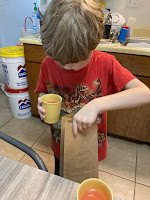 Dinner was simple since July 12 was also Simplicity Day. We had tortillas with peanut butter, raspberry jello without any added fruit for Eat Your Jello Day and I think we may have had cut up apples as well. 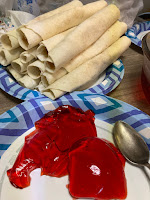 Jr. Jr. didn't stay simple with his jello, though. He had fun creating cool patterns in it but did eat it. 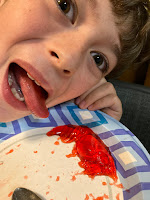 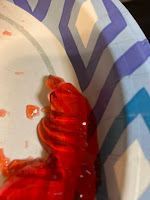 balloongal
Hi, I'm Kristin. I'm a stay-at-home mom married to a talented artist- his main medium being balloons, and we have five wonderful children. There is a lot more to me. You'll have to wait and see.